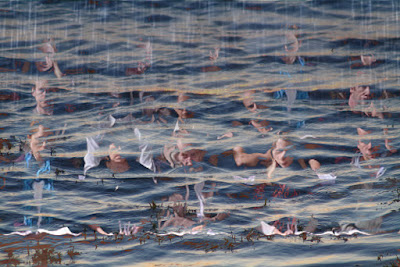 Waiting in the courtroom,
The scales from my eyes,
Fall wearily to the floor,
To the patterned blue carpet
In this wood-panelled room,
Where the benches, like pews,
Are hard under the thin cushions.

But there are no bibles
On the sloping racks,
No word of God here,
Where the black-inked grafitti
Is scrawled beneath, epitaphs
To the dull injustices of delay,
To each slow step of judgement,
Every verdict, conviction, sentence,
Deserved or undeserved,
In time, dispensed.

In the empty courtroom:
Cold water for the sheriff,
Tap water in a transparent jug;

As if rain somewhere had rained
To mimic the quality of mercy;

As if rain, already rained,
Had been gathered to fill
The empty cup of testimony
And ease the driest of throats,
To speak what was done.

In the courtroom as it stirs,
Justice is still outside, and we
The jurors, in rows, anticipate
The sound that mercy makes,
Like dogs on the leash, so little
Different from the gaunt accused.

We, who would be asked to judge,
Remember today’s rain falling
On the road between home and here,
See again the glisten of it:
Its singular refraction.

Asked to sift truth from falsehood,
To separate guilt and innocence,
We sit waiting in the courtroom
With our own misdirected moments,
Shreds of ourselves left from before,
Our past and the present illuminated
By this morning’s light.

© BH, 2017
Three days on jury service - the second in two years. This time I decided to keep notes. Never mind that, in the end, I was not chosen, enough filtered through to generate a poem.

I’m leaving aside the more bizarre features of the Scottish legal system: the interminable waiting, the legals in flamboyant Whitehall Tartan (pinstripes of huge and ludicrous dimensions), the towering paperwork, the repetitive and apparently pointless bustle. Not to mention the goldfish bowl used for the jury ballot; nor the faces above the cloaks of justice - one, a grumpy and enormous parody of Bill Oddie, another, a boyish face somewhere between Michael Gove and Gollum.

It was an experience. I watched fifteen good people and true selected and sworn in. I watched the accused on the front benches hiding their roughness under suits or, flanked by G4S flunkeys (who looked as rough) under a haircut and fresh sweatshirts. I confess, despite the ennui I was feeling, I wondered what further delights there could be actually seeing the process through.

Then I went home.

NB:It's very hard to find an image of a Scottish jury - fifteen jurors, not the expected twelve. The image I use here has fifteen faces I had to cobble together. I distorted them under a ripple effect and hid them under sea and rain.
Posted by Scumdadio at 11:03