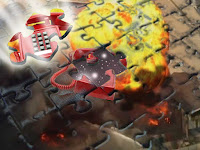 The pieces fell together at random. Bit by bit, the parareal jigsaw took on vestigial shape. Only the keys pieces were missing: the key pieces, always the ones which don’t appear right away.

The world is not, as the misguided and myopic believe, a place of secure and comforting normality. Indeed, out of the flux of bizarre and confusing events, stranger things happen than even the ordinary run of insanity.

On a day some time back, terrorists took over and destroyed a nuclear fusion plant. Had they not been killed to a man, the potential loss of life in the civilian sector could have been tragic. Within the same hour, and three thousand kilometres away, Moulay Said Bin Allakher, the Neo-Mooslim Libyan state president, had executed by garrotte, seven French patrials found guilty of conspiracy to insult the Koran by defacing it. Simultaneously, the Americans launched the trial phase of their stellar shuttle, the Sam Celeste. It was hoped to reach the  furthest point in the orbit of proto-planet Sol 10 by the following Friday. Meanwhile, an explosion in a food synthesis facility in Detroit killed three hundred workers and scattered semi-processed food matter and superconcentrates of potentially dangerous base materials over an area of ten square miles. The authorities are investigating.

Also, Dora T X Blafatski, who claims to possess paranormal powers, made an attempt to reincarnate a recently dead salamander, a pet belonging to Cynthius Pyroman, the incinerator tycoon. Seventeen adolescent golfing enthusiasts on an all night marathon play-off at Carnoustie in the Republic of Albion, claimed to have been raped by an incarnation of the forces of evil. Police are seeking a man wearing a shimmering cape and leotard. The suspect is thought to be twelve feet tall, horned and fanged, and armed with a barbed tail. He is thought to be dangerous only if approached.

That same morning, Ali Crump-Smellie was wakened by the telephone ringing by his bed. When he answered he heard only a whine in B-flat Minor. Mr Crump-Smellie, a music analyst, complained to the Telecom Network since he does not own a telephone. The Network are proceeding against Mr Crump-Smellie for illegal possession of a non-existent handset. In Lusaka, the earth opened and swallowed a bus carrying nuns from one convent to another. There were no survivors. Oryon Holoscopos, the Greek film star, has married his own daughter after receiving a dispensation from Pope Dennis the Sixth, costing him fifteen billion standard dollars. The wedding took place in Swindon.

The world keeps on turning, by grace of inertia. Day by day, a catalogue of misbegotten events mounts: insanity added to insanity, mediocrity compounding madness. Trivia complicate the great evils of the hour and the even more devilish horrors to come are overshadowed by the dramatic shape of today’s catastrophes.

So the civilised world flows on its flawed and constricted course. Its leaders carry on in the firm and mistaken certainty of their right to do so. The paths of their glory lead only to the cliff edge. In this seething human drama, in the face of the world view, the overview, the bird’s-eye view, the seeds of future crises lie unnoticed and wait. And wait. And blossom, trumpeting, in the lee of stupid achievement.

© BH, 1985
I stumbled on this from 1985, 32 years ago. Back then, I thought I was writing a fragment of speculative fiction, no more. Reading it now makes me feel it may have been a tad prophetic. Of course not everything has come true (yet). But, I detect echoes of Charlie Hebdo there. We do have an outer proto-planet, Eris. And there have been space missions. Only the name Sam Celeste reflects the kind of cheap jingoism we’re only beginning to hear about.

Oh, and we’ve had several contaminating factory accidents involving loss of life, none, as far as I know, involving food. But who knows? Then we have the flaky stuff. Forced reincarnation for the elite’s pets, diabolic molestation, bureaucracy gone mad, sink-hole catastrophes, celebrities using wealth to buy sexually dubious favours through the so-called religious establishment.

I was out on the detail but the flavour is right. I particularly commend the last two paragraphs. We should have seen it coming, right?

Anyway, I’ve not altered a word. It presaged the world we’re now well into building and, now, I feel like Nostradamus.
Posted by Scumdadio at 15:47