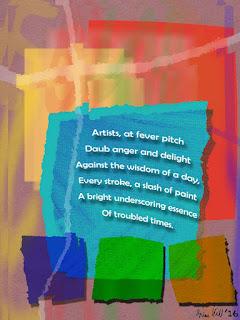 Artists, at fever pitch
Daub anger and delight
Against the wisdom of a day,
Every stroke, a slash of paint
A bright essence, underscoring.

Behind the scenes
Government spooks
Paint another canvas.

If pure shape has meaning,
And, if meaning, like clay, can be moulded,
Made and remade, who’s light might shine
And cast shadow?

Two hands of an artist, graphic and cryptic,
Doubled vision, forging ferociousness,
Is made only currency.

In cold daylight, art is tamed,
Stripped in translation, not a mirror
But a pointing sign, no more a reflection
Of what we feel: but instruction,
What to think, what we must be.

In the abstract, artists painted revolution,
Stepped away from cant and diatribe
But, in hidden hands, pure form
Became a secret weapon.

Governments and their spies,
Like dealers who cheapen art with price,
Cheapen it for politics and power,
By a device imprison us in a deception,
In the false freedom of half a truth.

Stolen works of art
Are no longer cut from their frames,
Merely exhibited for a stolen purpose.

© BH, 2015
I read somewhere (last year) that the CIA had subsidised exhibitions of American Abstract Expressionists like Jackson Pollock, William de Kooning and Mark Rothko to create cultural cover in the Cold War. This was meant to show the Russians that the USA (and the West?) were progressive and liberal.

I was struck by the level of double-think implied in this. Read more here, here and here.

I composed this poem, trying to get to the bottom of ‘what is art?’ when the political ideas art might set itself against chose to hijack its rebellion for their own political smokescreen.

And, d’you know, I still don’t know what to make of it…