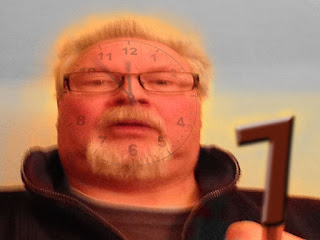 Time is running.
One minute has gone already
To where old minutes go to die.
Time is running
Like water out of my fingers
And the words they contain
Are stains upon the page.

Pullitzer Petrograd hauled himself out of the waste-disposal skip. Unceremoniously discarding the banana skin from his left shoulder, he leapt to the ground. The street was quiet; too quiet.

With a scream of tyres, the shape of an auto-tank materialised from a side-street. Uniformed Strato-cops were already pouring from the open flank-doors, zap-guns held ready. Pullitzer broke into a trot. Under his leisurewear djellaba he fingered the power toggle to his auto-boots. He knew the battery flux was low. But it might give him the edge he needed.

'Halt or I fire!' bellowed the cyber-vocal circuits of Leader One. Zap guns swung to bear on their target, set at stun level, Immense Pain. Pullitzer slammed the engage unit and his boots hummed. Power surged into the fibro-soles as the torque members throbbed with raw energy. Hot exhaust fumes billowed from his trousers. Dust kicked up into the faces of his enemies. In a flare of zap-beams he was gone. The agony rays hit nothing but air and a corner of djellaba fibre. Pullitzer had escaped again.


© BH 1990
I don't officially remember when this came out. After 1974, obviously. I'd never posessed, let alone worn a djellaba before then.

In the light of more recent upheavals in North Africa, it has a certain resonance. The sci-fi flavour makes it more so, don't you think?

Posted by Scumdadio at 23:00 No comments:

In the beginning was the six-day week. Toil without end.

From the void, God created Heaven and the Earth and Time and Motion and the study thereof.

In the firmament, He set arc lamps and divers illuminations: the sun by day and the moon and stars at double time.

On the first day, God created merry hell until the Angels ended their dispute and settled for a pay rise in line with inflation.

On the third day, God created factories and an industrial infrastructure as well as rats and micro-organisms with which to infringe Health and Safety regulations.

On the fourth day, He created the closed shop, industrial relations and all that these entail.

On the fifth day, God created the pursuit of pleasure for profit, sharp practices, blunt instruments and the diseases of economic disaster and urban decay.

On the sixth day, God created tension and stress-related disorder, riots and their police, skulls and bludgeons, sundry petty malices and cheap tricks too distasteful to mention.

On the seventh day, He rested and decided to get up late. At lunch, He made up His mind to do it all as a TV movie. Angelo Gabrielli, His agent, thought it was a great idea and, over a glass of Liebfraumilch, they dreamed up a press release and leaked it to the major dailies.

© BH 1983
Strange how some things weather over time but don't quite wear out.

Back before 1983, the gospel according to industrial relations seemed the only truth. Then Thatcher broke the miners in the seventies and the legacy of that attrition tore up the rule book. As paragraph 23 sub-section 12 faded into memory, the jobsworth mind of dyed-in-the-wool shop stewards tranferred to other bureaucracies. The media star rose in the heavens along with cynicism and cheap-skate sensationalism.

So we fell from grace, or at least from one state of gracelessness to another. All we did was swap sicknesses, in the end going down the pan at the same inexorable rate.

God looked down, looked upon His works and thought, 'Did I do that? Not bloody likely!'

Very little has changed now you come to think about it.
Posted by Scumdadio at 23:34 No comments:

Way back on December 31st-January 1st there seemed to be some debate about whether the next decade had already started or whether it was just about to. We actually had this back in 2000, when some argued that the millennium didn't actually start till 2001.

We obviously have too much time on our hands if all we need to sort out are niceties such as this. That said, there seems to be the usual pedantry at work in this debate. Numbers and numbering systems adapt to their functions, at least to an extent.

We start at zero, I suppose, but we don't count in whole numbers till we get to one. That's why babies get to be aged nine months. Then we reckon age by the past reckoning of years. If I say I'm 40 that's in the past, of course. I'm really going on 41.

Decades, then, if we start at zero old JC kicked it off way back by being, however miraculously, born. He didn't get round to doing all his founding a religion stuff till year 30. Three years later he was on the cross. You know the rest.

It all depends on the idea I've just floated concerning the year of counting. Here we are in March 2011, that is, quarter past 2011. Here it is for me, quarter past eleven. Is this the eleventh hour? Or is it the twelfth that's just not finished yet.

You decide. It's taken me since New Year's in Dallas Texas to work this out and I'm still not sure the debate is settled. Are we one year into the second decade of the twenty-first century or only in the first year of it? Jeez, I don't know.