I woke up with that phrase running through my head. Had to Google it. What I thought might be some cosmic concept about the end of days, when the universe finally interplodes and starts again from diddly, turned out to be a term for data storage.

Disappointed, I read on. Little Endian stores the least important value first while Big Endian does the opposite. Then they store data in any order anyway. By the time I got to the bit about Reduced Information Set, TCP/IP and the extremely good reasons for these arrangements, I was ready to go back to bed.

Afterwards, though, it occurred to me that, when it comes to eating I'm Little Endian. In fact, I'm pretty sure we can divide the human race into Big and Little Endian eaters. Provided they have enough to eat, that is.

When I eat food, pizza, for example, I eat the least tasty parts first. I eat the crusty bits before the cheesy stuff. I save the best (in my estimation) till last. But I know of those who get wired in to the cheese and pepperoni straight away. They might even leave the crusty bits. To me that's impatience, but each to their own.

Maybe I'll start a Little Endian Food Forum or maybe set up a Facebook page. If that sounds suitably pointless, consider this. The internet is Little Endian in its data storage. If its use is too, what else should we expect? The least important things have priority, then everything else is chucked in at random. Oh what a world!

I think my Big End has gone.
© BH 2010
Actually, it's a bit OCD. I fully admit, part of me is further up the male-spectrum-behaviour chart than many. I mean, I do like sorting screws. Or nails for that matter. Maybe it's a man thing. Sorting the CDs into alphabetical order of the years of the composer's birth.

(for the Wilderness Children - and all their mothers and fathers)

But they sing and, singing, love.
Although they take our children
and slide guitars and synthesisers in their little souls,
rock and roll is raw and real.
It reaches in where text-books never did.
It answers our cries for release from danger,
for comfort in our animalness.
Radios of the world align.
Little ferrite rods are marching.
Copper wires turn into staves
on which the tunes are hung.

Sung in tongues, the hiss of questions come in rhyme —

Sing about this dreamy stuff —
Hush away that loveless ache…
Will the beat be just enough
To give back what we take?

This jive is a dangerous dance,
These creatures sing of chance
That turns a bomb into a saxophone,
Makes laser into Movietone.

Who lulls the monster's many heads to sleep?
Looks for its chains?
Music being both volcano and symphony
Seethes and sooths the savage human heart. 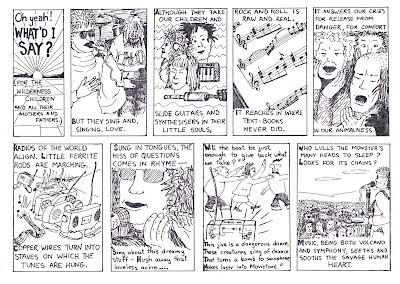 © BH 1988
I wrote this to go with a single, if I recall. I can't find it. All I have is a flexi-disk distributed with the fanzine Sowing Seeds #5. (The Wilderness Children "There's A Good Time A-Comin'"/"On the West Coast" (Choabie Records, DOSS I). 1987. It's here. There's another cartoon in the fanzine - The Only Adventure of 12-inch O'Toole - which is not as rude as you think. But it's another story.
I also learned that Fraser Reid who played guitar has recently died. I worked with Fraser when him and Andrea lived in Mid Craigie in Dundee. I did the cartoons at his request. Long time ago. We lost touch not so long ago, as our Christmas card lists decayed.
Sad that he's gone. You can read more about Fraser here.
Posted by Scumdadio at 13:24 3 comments: