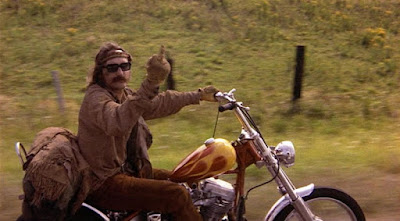 Crossing the border
They threw away their watches
Time was indifferent to them now.

Not a line on a map
Not a place or marker stone
But the edge of one day and the next
Old ways left abandoned, misdemeanours
Past their limitations, hell mend them.

Now Mardi Gras and exuberance
Pipe-dreams flooding from the bottle
Spiraling, smoke-filled, tongue-tabbed
In the visionary trip-trap night;
So much for freedom when history
Catches up in cold, cold dawn.

Change lies wasted in the desert
In the dry gulch winding by the highway
Freedom is gunned down by circumstance
And tiny careless hate, passers by
Bystanders, innocent or not
Fall by the wayside.

Easy riders, for fortune
Try to reach horizons too far
For roads to broach, wheels to cross
Riding the sunset like a movie scene.

There I go, released,
One step, two steps, three,
Crossing the border.

Today, I retired. From the low-wage economic mainstream. No regrets. Except for the people I’d been among. Learned a lot in four years at it.

So, leaving, moving on. Finger to key, as ever, brought out the subliminal. I got Easy Rider. A few fleeting images and the sense of the moving moment.

It began well but, later: sex and drugs and rock and roll. Troublesome. I’m too old for that. Well,, maybe still rock and roll…

When we step out, though, it’s with a will. Onwards and upwards and all that. It’s what we do. What we must…
Posted by Scumdadio at 00:03