No time to forget

Stone roads, blood-stains and sweat
All the hard efforts of bone
Bringing us to heel.

I rubbed shoulders with labourers
Leaned in the wind behind the plough
Churned the seas for harsh reward
Laid the fruits of it on some table
And shared only leavings.

I didn’t have the hands for it
Nor the heart, it seems,
To bear the bitter blast under wild sky
To feel it blowing from future to past
With no cover and head bowed
Nowhere else to walk.

I aspired, as so many do,
To rise above, to swim against,
To become and go on becoming.

But aspiration is a longer name
For hope, and hope postponed;
Today’s shortcomings go unaddressed;
Tomorrow is a vain promise.

I put my back into it
Heaving at my obstacles
Rolling away the stone
To find an empty sepulchre:
The corpse-less shroud
And the ghost long fled.

No time for redemption, then.
After the down-trodden,
Well-worn paths of getting here,
The future pushes us further down
With it’s relentless, katabatic winds.

The world is made to slope away from us.
Down is where the hollow men and women
Live in their grim shelters
Huddled under rain
As grey as the cloud above them
Facing an endless rolling from above
From the unseen heavens
Where someone else’s sun is shining.

There are no corridors for the powerless
Only back alleys and yards
With their secrets of misery. 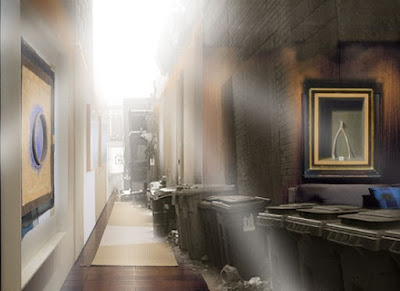 Only later did I try to work out what this was about. The ‘corridors’ line started it off but, in the end it finished it. It seemed to be about having no power. Then the struggle to escape.

Then came 'aspiration'. That’s a word much bandied in political circles right now. It’s meant to identify some stratum of society with vision or purpose. All very noble. I just hear focus-group muttering.

Upward-socially-mobile. For that, I read 'deferred gratification' and ‘jam tomorrow’: the notion that life will get better if you postpone your demands. Promises, promises, promises. It’s the great IOU in the sky.

So I changed the name to Wishbone. You know, that little chicken bone you snap to make a wish. First your goose has to be well and truly cooked. Then you get to pull it apart. The catch is, only one person gets to make their wish... Some hope...
Posted by Scumdadio at 11:00