Second-hand lives,
Vicarious breaths,
Even our heartbeats thunder
One after the other
In repetitive imitation.

Who is like us?
Not one.
Everyone is dead.

We created God in our image
And He despised us for it.
We became powerful
Beyond compare
Now mirrors everywhere
Blind us with our own reflection.

We were our own fathers
Our own mothers
Even our own children.

Something so perfect
Rises in the imagination
And draws us into change.

But change erodes the dream.
Being somehow inadequate.

In becoming we forget the truth.

Made up of likenesses
We lose sight of who we were.

We have nothing like the courage
To let ourselves be.

© BH 2010
Write something new and there is a requirement to let it mature. There will be hatchet work on this in the future.

So I said once but then I was a mumbling bastard.

This piece was written to reflect the word 'emulating' which word is the fifth in an alphabetic poem cycle based on a poem called 'Initialising'. I described it as a 'multi-layered poem cycle designed for the web'.

LIke most things it languishes unfinished in a corner of cyberspace. That, you see, is the nub of it. Cyberspace does not exist. It has no being. All that goes on there is an endless process of becoming. It is flux without now.

In fact, didn't the Victorians describe diarrhoea as 'flux'?

I rest my case.
Posted by Scumdadio at 14:22 No comments:

There have been cities
To live in
Where you go
To find the elephants of your life
In parks
And dark back alleys.

And I have thought
While hunting
How mad it would be
To be caught between the crazy elephant
And the shallow grey sea.

Yes, they are large
And barely visible
Except out of the side of an eye
Or when you are between sleeps
And they strangle and crush you.


© BH 1970
It was a long time ago, I know, but Henri read this. How else could I ask for his autograph? A slip of paper shoved under his nose would have been crass and hardly hip. Besides after you've shared several pints in the back room of Ma Cameron's, it would be nothing short of weird. 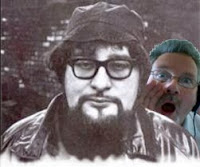 So we weaved our way through the afternoon haze toward my digs. Adrian ogled the girls from Albyn School for Girls, as a matter of course. In my half-attic room just below its huge cupola in Gilcomston Place, I shyly gave him the poem, scribbled on a scrap of notebook paper.

I think he sensed the autograph scenario. He nodded but passed no comment. He wrote on it: 'A very nice poem,' and signed it 'A Elephant'.

I put the manuscript in a very safe place so I could treasure it always. Then I grew up or the poem got lost. I'll never know which.

Posted by Scumdadio at 19:12 No comments: